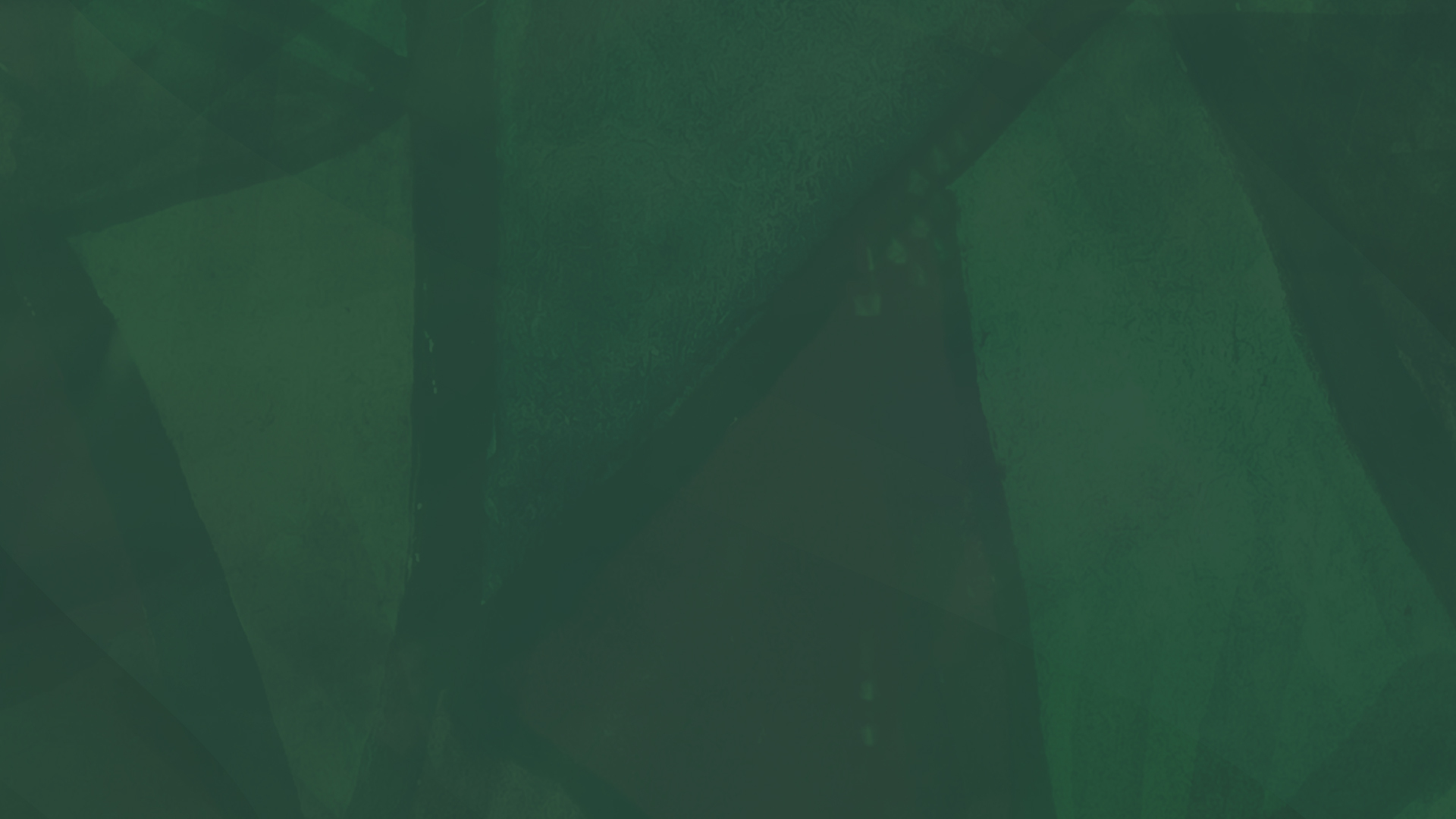 This section of history was written by Mrs. Grace (Mike) McGinley. This history had been prepared in cooperation with the historian and the people of the community. It is the privilege of the University Extension office to assist the communities in the duplication of their efforts. The preparation of history of this community in Crawford County is part of the overall efforts of Crawford County during the Sesquicentennial year of 1969.

The history of St. Philip Parish, rural Soldiers Grove, Rolling Ground, began with a little log church built in 1857 in the deep virgin woods about one mile east from the present Highway 61 on County trunk K, which no longer exists. It is now on State hwy. 171. This was one of the earliest churches built in Crawford County, being the first in Clayton Township.

No parish organization existed in the early days when Father Lucien Gaultier and other priests visited this section to say Mass for the Catholics of the area. Father Gaultier made regular trips through Crawford County, usually on foot to Mass for the faithful.

His first visit to St. Philip was July 6, 1857. Until 1859 he continued to make occasional visits there where he usually said Mass at the home of Mr. and Mrs. Terrence Gaffney and at the home of James Brady. He died a few years later in Prairie du Chien.

Father Gaultier’s successor, in October 1859, was Father O’Connor under whose direction the people of the area,  finished building the little log church begun under Father Gaultier. His residence was in Rising Sun. In 1863 Father Murphy became a regular visitor of the area.

Father Murphy was a great favorite among his people and during his administration many converts entered the fold. A modest monument now the spot of his burial in St. Patrick’s cemetery in Seneca.

When Father Monague came to St. Philips in 1863, he aroused the enthusiasm of the people by suggesting the erection of a new church. The people’s zeal was quickened even more about this time by a visit from the Most Rev. Michael Heiss, first Bishop of the newly erected Diocese of La Crosse.

During Bishop Heiss’ visit, three men of Clayton Township interviewed him regarding the organization of a regular parish.

Bishop Heiss encouraged the men, Mathew Ryan, James Brady, and Peter Kelly. He promised them that he would give the congregation a resident pastor if the people would provide the necessary support for a parish.

Bishop Heiss came to dedicate the new church in August 1872. Assisting him were Father Verweist and Father Bernard.

The first resident Pastor was Wendelin Bernard, who came to St. Philips in February 1872. A year later he was succeeded by Father R.V. Steinberg in February 1873. Two other pastors in succession were Father Patrick Walsh in June of 1875 and Father John Conroy in May, 1876. Father Conroy died February 1877 and was buried in the church yard near the front entrance of the church. In 1909 when the new church was built, his remains were removed to the new cemetery. The next pastor of St. Philip’s was Father Bonaventure De Gory, a Capuchin friar from Holland whose superiors allowed him to come to America for the sake of his health.

Father De Cory’s missionary labors extended throughout the whole state of Wisconsin since he belonged successively to the Diocese of Milwaukee, Green Bay and La Crosse. He was know as a great builder of churches and had a facility for acquiring the necessary funds for his undertakings because of the good will with which he was received among the people. He built at least forty churches in Wisconsin during his lifetime.

Father De Gory was responsible for two churches that he attended from St. Philips, St. Patricks in Scott Township and Sty. aPaeter’s in Richland County. He also built a two story cottage type school for 80 pupils in 1881. First known as St. Francis’ School, it was staffed by the Sisters of Mercy of Fond du Lac. Later the Sisters of St. Francis of Silver Lake took charge. The Sisters’ residence occupied the second floor of the building.

Father  De Gory left St. Philip July 8, 1883 to visit friends in New Jersey and his native Holland. He traveled throughout the greater part of Europe and spent two months in Rome where he received an audience with the Holy Father. After his return to Holland, he resumed community life among the Capuchins and spent his last years in the quiet and peace of his monastery.

A week after Father De Gory departed, his place was taken by Father J.L. Fitzpatrick who had been ordained that month by Bishop Killian Flasch at Big River, Wisconsin. 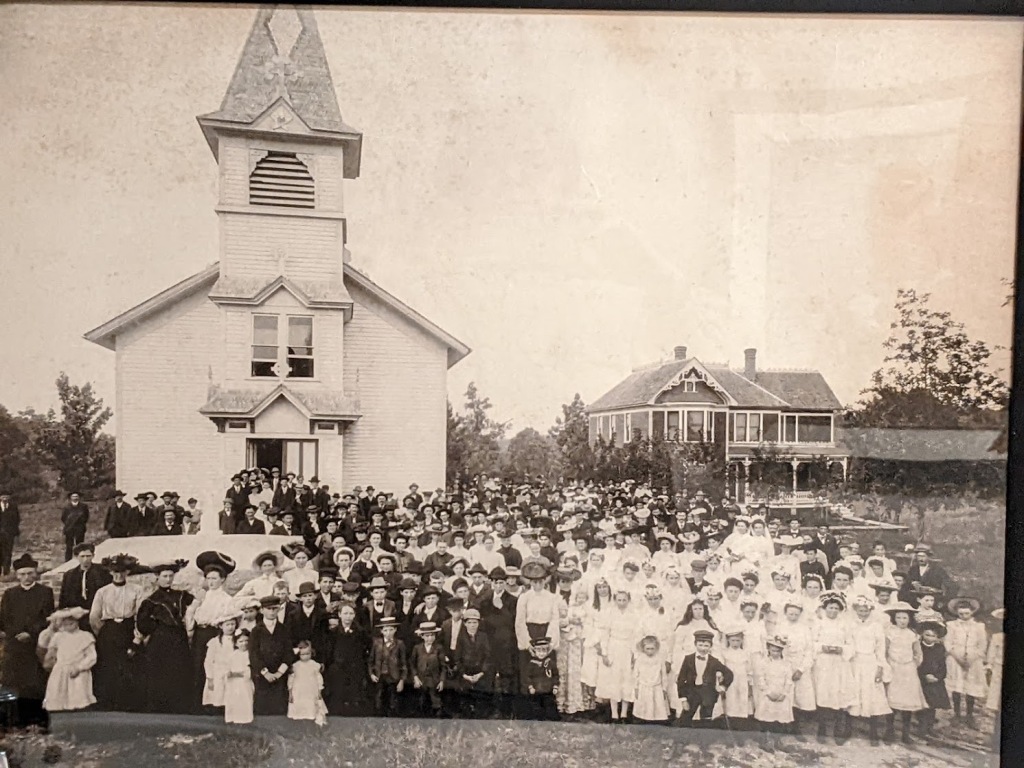 St. Philips cemetery was established in 1857 near the church. The land for the cemetery was obtained from James Garraughty and Mary, his wife. It was deeded August 14, 1858 to John Martin Henni, Catholic Bishop of Milwukee. The deed conveys two acres of land. In 1909  land from Walter Gorman nd Katie Gorman to James Schwebch, Bishop of LaCrosse accounted for 1 acre and 32 rods added to St. Philip's Cemetery. The first burial wa s that of Phillp Murphy in whose honor the church was  named for St. Philip. He was born in County Wexford, Irelnd and came to this country in 1852. Hi died in Clayton Township July 4, 1857. 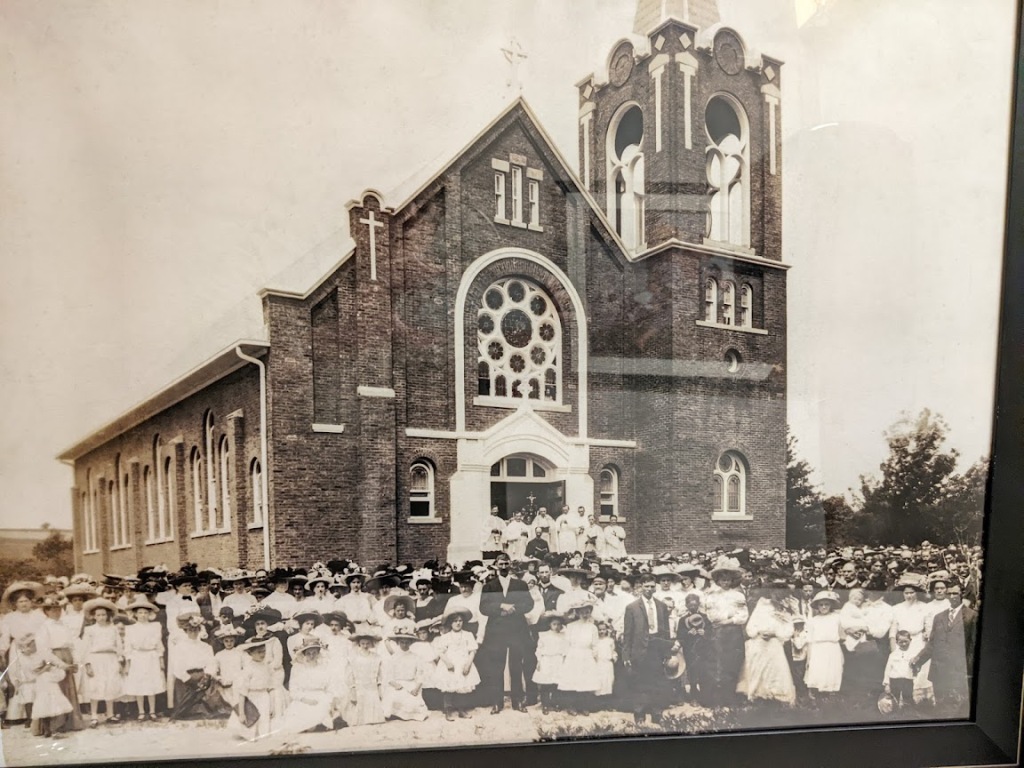 Under the direction of Father Henry J. Artman in 1909 the old church of 1870 ws razed and the beautiful modern brick structure of the present day was built. The land for the original church was acquired from Terrance Gaffney to John Martin Henni, , Catholic Bishop of Milwaukee on October 14, 1858. It conveyed six acres of land.  In September 22, 1886 land belonging to Michael Heiss was deeded to Killian C. Flsch, Bishop of  LaCrosse. This deed included the church property and cemetery from the Milwaukee Diocese to the LaCrosse Diocese.

In early days, the people cut hoop poles, ties, and logs. They kept a few cows in order to have milk and butter. Later they found a market for butter in nearby towns. In 1870 or so, John A. Bigley had a blacksmith shop and shoed horses in the neighborhood. He was also the custodian for years at St. Philip.